You’ll find many types of coffee out there. But if you don’t have a basic idea about it, then the classification might become hard for you to understand. Don’t worry. I’ll be here to discuss the matter with you as thoroughly as possible.

So sit back and relax because we are going to dive into the world of coffee and its different types.

How Many Types of Coffee Are There Exactly?

Well, it depends on how we categorize it. You can classify coffee from different points of view. Depending on these different perspectives, the answer will also differ.

For example, if you are asked about coffee beans, the answer will be different from asking you about coffee drinks. I think I was able to get this point through.

There are many different types of coffee beans in the world. Not all of them are that popular. Among all these coffee species, some say, 2 are the main ones while others say 4.

We’ll go with the opinion that says four, that way, we can discuss the view that says two as well. These are as follows:

These aforementioned names are the names of the 4 major coffee beans. I’ll try to give an idea of all of them one by one.

There’s a reason why Arabica is mentioned first when discussing different types of coffee beans. Actually, there are two reasons.

First, Arabica coffee is claimed to be the first-ever cultivated coffee species. And second, it is the most available and highly marketed coffee bean, contributing nearly 60% to the global coffee production.

Arabica coffee originated in Yemen. Later on, other countries joined in on its production. Of those countries, Indonesia is a worthwhile mention. Indonesia got these specific coffee beans through the spread of the Yemeni trade.

It is also quite common in many other countries including China, South America, Southeast Asia, and some parts of Africa. Tropical climates of countries that are near the equator are very favorable for its growth.

High areas above the sea level are perfect for growing this bean, mostly where it rains a lot. For example, Brazil is a fantastic place for this. In fact, Brazil is there on the top of the list of countries that export the most Arabica beans.

You might wonder why they call it Arabica. I have mentioned before that it mainly originated from Yemen.

However, it is believed that in reality, the Arabica beans were discovered in Ethiopia and then moved to Yemen, from where it became popular. To know more details about this matter, you can read our article titled “The History of Coffee”.

How does it taste? In short, it tastes better. It contains relatively more sugar and therefore is less bitter. Also, this coffee is less acidic. Both its flavor and taste are noteworthy.

Compared to Robusta beans, Arabica coffee beans are bigger in size and price. It being more delicate is the reason for its higher cost. That is not all; Arabica is also better than Robusta in taste and flavor. Nonetheless, It loses against Robusta in caffeine content.

We learned a bit about Robusta from our foregone discussion. We learned how it is more acidic, less sweet, contains more caffeine, and is less expensive. Robusta has a stronger and sharper taste. If you like more caffeine in your coffee and have a weakness towards bitter tastes, then it is for you.

For its above-mentioned characteristics, these beans are more appropriate for making espresso and instant coffees.

The name Robusta suits it because of its robust taste. As it has higher caffeine content, it becomes less prone to diseases compared to other types of coffee beans. The caffeine helps in pushing back insects that might cause the downfall of the plants.

Robusta is easier to grow. It can be farmed in both high and low altitudes and a variety of climates. Due to this and the fact that it is not affected by diseases as much, many farmers prefer this and earn quite a fair amount of profit.

Where did this one originate? It originated in the sub-Saharan parts of Africa. This particular type of coffee bean is grown in many countries worldwide including Indonesia, Uganda, India, Brazil, and Vietnam, while Vietnam contributes the most in its production, almost 60%.

It is cheaper than Arabica for its lesser need for care and tending. Cheap contains more caffeine, and has a stronger taste! Espresso lovers are going to love it.

This coffee is originally found in central and western Africa. However, it is now also grown in other countries like the Philippines, Malaysia, Indonesia, etc. The name came from its country of origin, Liberia.

The size of a typical Liberica coffee bean is larger than that of Arabica and Robusta. But its caffeine content is the least. Due to its rarity, the Liberica is more expensive. So, it needs a very specific climates for healthy growth.

The nutty, smoky flavor with a bit of dark chocolaty taste makes it quite unique. It’s said to have a flowery and fruity aroma attached to it; however, when made into a drink, tastes woody.

It’s the rarest of them all and thus contributes least to the global coffee production. It is mainly grown in the southeastern parts of Asia. 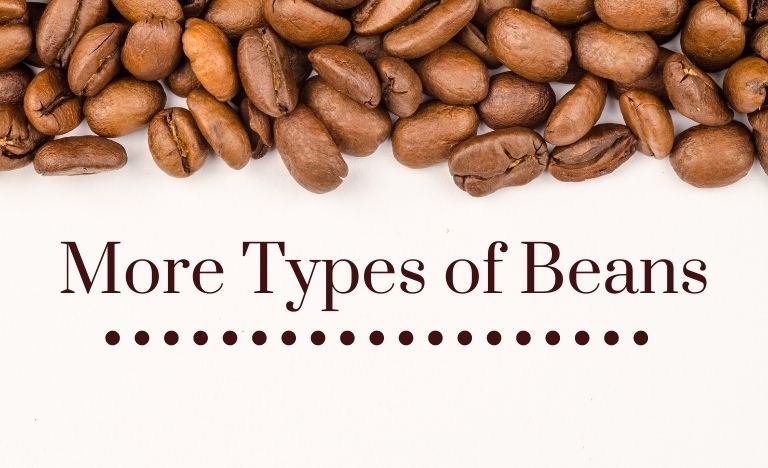 Mentioned below are some other less popular types of coffee beans:

Apart from these, there are also many other beans out there. While there are so many bean types globally, the Arabica and the Robusta make up almost all of the global production.

We have covered the topic of coffee beans, now let’s get into coffee drinks.

Black coffee is as simple as it can get. Mix coffee grounds to a hot cup of water, and you have your coffee ready. It is also known by the name café noir.

Pass a bit of highly pressurized hot water through some fine grounds, and you’ll get a shot of espresso. Some like to drink it solo, while others like to use it as a foundation for other types of drinks.

Is one shot of espresso too less for your appetite? Then add another one and make it, and it becomes a doppio.

Steamed milk with a shot of espresso gives you the most popular coffee drink, the latte. It has a thin layer of foam as well.

Cappuccino and latte are basically the same. The only difference between the two is that the former has a thicker layer of foam than the latter.

Mix hot water into a shot of espresso and what you have in your hand is known as an Americano coffee.

Do you like chocolate? If so, then you’ll surely like this one. This is a chocolate espresso coffee. But that’s not it; there’s steamed milk and foam too!

Remove the foam from the latte or cappuccino. The foamless espresso with steamed milk is what you know by the name flat white.

Not a chocolate guy? Rather fond of ice cream? Then this is for you. Put a scoop of ice cream on top of your espresso or doppio and what you have is affogato.

This is a coffee drink that has roughly an equal amount of espresso and steamed milk. The milk is neither textured nor foamy.

It is a foamier version of a cappuccino.

The macchiato is another drink that is based on espresso. Although latte and macchiato both are derivatives of espresso, they are produced in opposite ways. Unlike a latte, a macchiato is made by putting espresso into steamed milk.

Steamed milk and brewed coffee, that’s all you need. If black coffee is too much for you, just add a little foamless steamed milk and you have café au lait.

Put ice in your cup of coffee. Add a splash of milk. You have your iced coffee. You can add some sweetener to it if you like as well.

Espresso with ice. That’s iced espresso. You can also add ice to the espresso-based drink such as latte, cappuccino, macchiato, etc.

Add some whipped cream and syrup to your cup of coffee. Blend them together. Serve it cold, and voila! You have a Frappuccino.

If you want to make a cup of cold brew, you need to steep the coffee beans. For how long you ask? It depends on how strong you would like it to be. Generally, the time range is somewhere between six to 36 hours. After the steeping process ends, add cream or milk, whatever you like, to the cup, and what you have is known as a cold brew.

It is supposedly the trendiest of the iced coffee genre.

That’s all about coffee drinks. Now let’s talk about the types of coffee roasts.

What About Coffee Roast?

Coffee beans are roasted as a procedure to turn them into a more edible form. There different types of roasts and each one of them has a different taste and purpose. Let’s go through them one at a time.

This type of coffee roast is the least roasted one. As a result, it retains the most original taste and caffeine. It also has the highest acidity. No oil is formed on the beans. It has a strong scent with a sweet and tangy flavor.

The beans are roasted more and thus are browner in color. It is comparatively less acidic and more bitter.

It is both darker and has a heavier body than the former two.

Dark roast coffee is darker than the medium roast one and is dark brown, sometimes black. Due to most heating, these beans develop oil on the surface. The tastes are moved even further from originality. This type of coffee is less acidic with a heavy body.

Coffee beans are not directly mixed in hot water to produce coffee; rather they are first ground. There are different types of coffee grinds, which I’m going to mention below. But before that, if you are interested in grinding coffee beans, you can read our article “How to Grind Coffee Beans”.

These are the largest in size. You can use these grinds for French press and cold brew.

These are the finest type of grinds. When you hold them, you’ll feel like you are holding some kind of powder. This type is generally used for Turkish coffee.

Perfect for espresso, these coffee grinds are fine, but not as fine as flours.

This grind falls in between the coarse and the fine grinds. Apart from espresso and Turkish, you can use it for a variety of coffee.

You have gained the knowledge of a genuine coffee lover as you have learned about the different types of coffee. Now you can enjoy your cup of coffee not only with your taste buds but also with your thoughts.

Think about the type of coffee as you are sipping it. This is sure to make your evening with a cup of coffee an enlightened one.