How are Coffee Fruits Constructed? Coffee fruit consists of the following parts: rind, fruit pulp, mucilage, husk, silk, and causation. It can be divided into two main parts including:
In some other documents, the structure division may be different such as: The fruit skin will include three components: Exocarp, fruit pulp (Mesocarp), husk (Endocarp), while the core will include including: Silk Skin (Silver Skin) and Coffee Bean (Endosperm) and embryo.
1. Structure of coffee beans:
– Skin consists of 2 layers:
+ Outer Skin : The fruit skin is formed by a layer of small parenchymal cells (primary cells containing chloroplasts). and has the ability to absorb water). The color of the pods at the beginning of formation is green due to the presence of chloroplasts then disappears as the fruit ripens. The color at maturity depends on the coffee variety, but most commonly red or yellow. The red skin color (Typica coffee) comes from anthocyanin pigments, while the yellow color is attributed to luteolin (Bourbon coffee).
+ Meat crust (Pulp or Mucilage).  In unripe coffee cherries, these are hard tissues attached to the rind, and as the fruit matures, pectolytic enzymes break down the pectic chains to form sugars and pectin compounds (Borem, 2008) that form a structure. soft, succulent with a high viscosity, so it is often called mucilage. In wet processing, this mucilage is removed through controlled fermentation. Meanwhile, with the dry processing technique, the mucus along with the outer shell is preserved during the drying process.
– Seed (Seed), including 2 shells + kernel
+ husk (Parchment): is the outermost layer of the seed, in direct contact with the rind, the parchment is formed from three to seven layers of scleroderma (fibrous cells play a major role in plants) so it is also known as the husk. . The cells constituting the husk will harden during the maturation of the coffee fruit, thereby limiting the final size of the coffee bean,
In Arabica coffee, the average weight of the husk with a moisture content of approx. 11% is within 3.8% of the total fruit weight (Wilbaux, 1961, as cited in Borém, 2008).
That said about the husk, this part was not used before, because it had no economic value. But recently, the Huskee project used rice husks to make coffee cups.
+ Silk skin (Silver skin): Silk shell formed from nucellus is silvery white after drying, so it is also called silver shell. This shell is very thin and can be removed from the kernel during the polishing process. However, some coffee processors often leave silk on the coffee beans as a natural protective layer, which will then self-destruct during the roasting process. In some regions, and depending on the coffee variety, the skin may be darker.
+ Coffee bean:  The innermost and most important part of the fruit, responsible for the accumulation of nutrients for the embryo’s germination. A regular coffee fruit has 2 cores (especially 1 or 3 cores). The chemical composition of the kernel is extremely important as it is considered a precursor to the later flavors and aromas in roasted coffee. 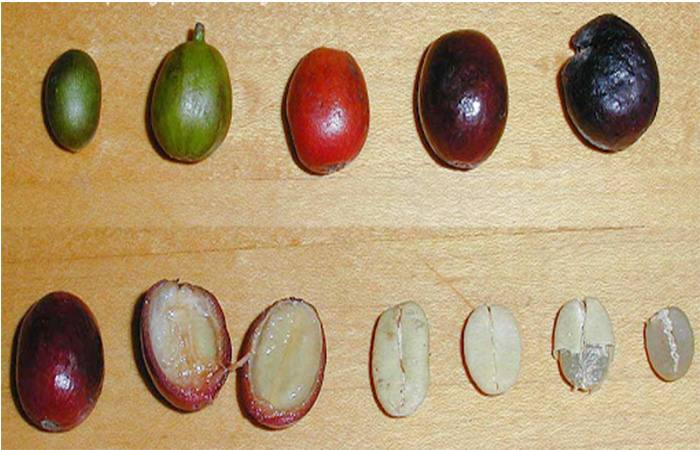 Chemical compounds found in the endosperm include:

In the coffee kernel layer will be Embryo, consisting of an embryonic shaft (hypocotyl) and two cotyledons 3-4 mm long (Wintgens, 2009). When the seed begins to germinate, the embryonic shaft will stretch and push the seed above the ground. The initial cotyledons are underground and soon after the new cotyledons will form. When sown will be seedlings .